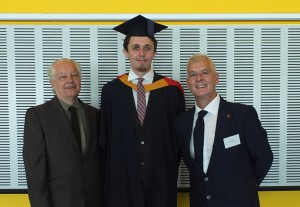 A host of benefits and opportunities await LIPA graduate Saam Jafarzadeh over the course of the next year after he was named the recipient of the 2015 Music Producers Guild Prize.

Launched in 2010, this prestigious prize rewards the most promising student to graduate from The Liverpool Institute for Performing Arts (LIPA) Sound Technology degree programme.

“Saam’s final year work showcased some excellent solo work, and work as an engineer and producer of others. He has shown that he possesses one of the most important assets in this industry – good ears. Across a range of material Saam has demonstrated that he can be both technically adept and creative in application – always having a sympathetic ear for the final product. The incredible opportunities afforded by the MPG LIPA prize will, we are sure, help develop his talents to an even higher level.”

The many benefits conferred on Saam Jafarzadeh as a result of winning the MPG Prize include the opportunity to work alongside top recording professionals such as producer Mark Ronson, engineers Tom Dalgety and Haydn Bendall and mastering engineer Mandy Parnell. He will also be given the chance to intern at RAK Studios, winner of the 2015 MPG Award for Best Studio, and at Steve Levine‘s Liverpool based facility.

To enable him to take up these opportunities, Jafarzadeh will receive £500 from PPL to cover travel and accommodation expenses. He will also visit the headquarters of AMS Neve and Avid to meet their product specialists, learn about console deign and have in-depth tuition on Avid’s flagship controller, the Pro Tools S6. AMS Neve is offering Jafarzadeh an additional prize of a 1073N Mic Pre & EQ to kick start his own collection of high end pro audio equipment.

“MPG is delighted to present this annual prize and give this important support to an outstanding student from this outstanding course,” says Tony Platt. “We are very grateful to the MPG Award winners and MPG Members who are generously providing this exciting list of opportunities, and the companies such as Avid and AMS Neve who are prepared to go that little bit further to give someone a strong start in our highly competitive industry. We would also like to thank PPL for once again helping out a future star creator.”

Originally from the UK, Jafarzadeh found his passion for music while growing up in Singapore and began developing his skills and knowledge there with a diploma in Sonic Arts at Republic Polytechnic. His spectrum evolved from a love of guitar and heavy metal to encompass hip hop beats and live sound engineering.

While studying at LIPA, Jafarzadeh recorded, mixed and produced music acts, both through his academic coursework and with friends and new colleagues at the Institute.

“Now that I have graduated, I’m hoping to build up a network of bands and musicians by working with them as a producer, beat maker, or mix engineer,” he says. “Initially I will be staying in Liverpool while I improve my production skills but I’m keeping my options open and a move to London is a possibility within the next year or so.”