Youth To Be Honoured By The Music Producers Guild 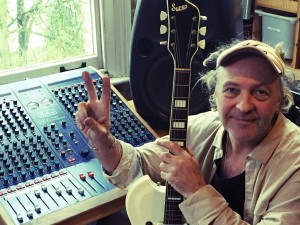 Artist and producer Youth will receive a top accolade at the 2016 Music Producers Guild Awards when he is presented with the PPL-sponsored Award for Outstanding Contribution to UK Music.

One of the UK’s most consistent, credible and influential producers, Youth has been responsible for numerous hits from artists including The Verve, Embrace, Echo and the Bunnymen, Crowded House, The Orb, Sir Paul McCartney and The Charlatans. Among his recent projects was the co-production of Pink Floyd‘s final and largely instrumental album, The Endless River. Released in 2014, this quintessential Pink Floyd album sold over 2.5 million copies in its first year. It debuted at No. 1 in the UK and in more than 20 other countries around the world including France, Germany, Canada and New Zealand. Youth also remixed David Gilmour‘s current solo No. 1 album, Rattle That Lock.

By honouring Youth with an Outstanding Contribution Award, the Music Producers Guild is recognising an exceptional body of work that spans more than 30 years and has made a significant contribution to the success of the UK music recording industry.

Tony Platt, MPG Awards Group Director, says: “Combining the talents of producing, engineering and playing at the highest level requires a special set of talents and a refined sense of balance. Youth was chosen for this award because he has consistently demonstrated his unique mastery of these talents with an amazingly wide variety of artists across the genres. He really has contributed in a most outstanding way.”

As a young musician Youth, whose real name is Martin Glover, cut his teeth doing bass sessions for Adrian Sherwood productions and for artists such as Kate Bush whose phenomenally successful Hounds of Love album had Youth on bass duties. He was also a founder member and bassist of the influential art-punk band Killing Joke, which has been hailed as the creator of an entirely new type of aggressive rock music. After leaving Killing Joke (and a short experiment with the band Brilliant, managed by Bill Drummond and featuring June Montana, Jimmy Cauty and other key innovators of electronic and indie dance music), Youth began working with Alex Paterson and Cauty as The Orb, a collaboration that was responsible for the introduction of chill-out ambient house music.

Cauty and Drummond eventually moved on to form The KLF, leaving Youth and Paterson to experiment extensively in the post punk British dance music and Acid House scene through their influential W.A.U Mr Modo label. This led to the release of two classic albums as The Orb – U.F.Orb and Adventures Beyond The Ultraworld, which incorporated Little Fluffy Clouds, a track that defined ambient house and chill-out and brought these genres firmly into the mainstream.

Youth’s skills as a producer were now being noticed by a much wider audience, not least because of his remix work with band like Siouxsie and The Banshees, Malcolm Maclaren, A Guy Called Gerald, Fine Young Cannibals, Marc Almond and U2. In 1993, he collaborated with Sir Paul McCartney who had developed an interest in remix culture. This resulted in Strawberries Oceans Ships Forest, an ambient album – and the first of three critically acclaimed albums – released under the name of The Fireman. Youth also worked with McCartney on his Liverpool Sound Collage album, which was nominated for a Grammy Award.

Over the years, Youth has notched up a staggeringly large and varied list of production and remix credits for artists such as Yazz, James, Primal Scream, Gun’s N’ Roses, Blue Pearl, Art of Noise, P.M. Dawn, Shack, De La Soul, Erasure, Beth Orton, Bananarama, Maria McKee, Suns of Arqa, The Shamen, Kool and the Gang, Texas, Pete Murphy, Tom Jones and Dido. His ability to turn a song around and create a hit is legendary. A perfect example of this is Zoe’s Sunshine on a Rainy Day, which flopped when it was first released in 1990 but hit No. 4 a year later when it was remixed by Youth and then chosen as the soundtrack for an Amiga 500 computer TV ad campaign.

Youth’s reputation as a super producer was sealed in 1998 with the release of two hugely successful albums – Embrace’s debut album The Good Will Out, which went gold on its first day of release and subsequently sold over half a million copies, and The Verve’s Urban Hymns, which sold over 10 million copies worldwide, went platinum 10 times in the UK and delivered a No.1 single as well as two Top Ten hits. Urban Hymns also brought Youth a BRIT Award for Producer of the Year after three consecutive years of nomination.

More recently Youth has been working with Culture Club on Tribes, the first studio album to feature the original founding members since 1999’s Don’t Mind If I Do. This album was recorded in Youth’s Spanish studio, Space Mountain, and in London and is scheduled for release in early 2016. Youth is also finishing a new Jesus and Mary Chain album (the first in 20 years), writing with new Universal signing Barnaby and Bauhaus frontman Pete Murphy, and touring with Killing Joke.

Alongside his production work, Youth has also launched four record labels – Drangonfly Records, Liquid Sound Design, Kamaflage and Butterfly – and has been a major player on the DJ scene with residencies at many renowned clubs around the world. He remains tireless in his quest for inspiration, excellence and innovation in recording great music and also finds time to paint, illustrate and publish poetry.

As sponsors of the MPG Outstanding Contribution to UK Music Award, industry organisation PPL says it is delighted that Youth has been chosen as the 2016 recipient.

Peter Leathem, CEO, PPL, says: “As one of the world’s most respected producers, with his talent for transforming genres and ability to inspire new heights of music appreciation, Youth is truly deserving of this award. A true architect of sound, Youth’s unique vision and creativity has seen him achieve phenomenal success the world over. It is only fitting that he receives the MPG’s Outstanding Contribution to UK Music Award in 2016.”

Youth will be presented with his award at the MPG’s 2016 Awards Ceremony, which takes place on February 3th, 2016, at the prestigious Grosvenor House, Park Lane, London.

Now firmly established as a must-attend industry event, the MPG Awards attract music industry stars and VIPs who turn out in force to celebrate the enormous contribution that recording professionals make to the success of the UK’s music industry. In 2016, the MPG is once again collaborating with the BRITS to present the winner of its Producer of the Year Award with a BRIT Award for Best Producer.