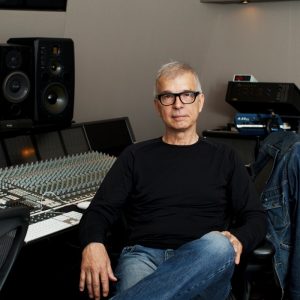 London, UK. January 23rd 2017: Tony Visconti, one of the most important and influential producers in the history of Rock and Pop, is to receive a top accolade at the 2017 Music Producers Guild Awards when he is presented with the PPL-sponsored Award for Outstanding Contribution to UK Music.

However, it is his long-term collaboration with David Bowie that has delivered the most memorable music, ranging from early hits such as Young Americans, Heroes and The Man Who Sold The World, through to The Next Day, which debuted at No. 1 in 21 different countries when it was released in 2013, and Blackstar, Bowie’s last album released just two days before he died in January 2016.

By honouring Tony Visconti with an Outstanding Contribution Award, the Music Producers Guild is recognising an exceptional body of work that spans nearly 50 years and has made a significant contribution to the success of the music recording industry.

Tony Platt, MPG Awards Group Managing Director, says: “Tony Visconti is a perfect example of the influence music producers have had on the development and success of the music industry in the last 40 years. From his contribution as a musician and arranger to his ability to support and enable the artists he has worked with, he has been – and continues to be – truly outstanding. We are delighted to honour and recognise this achievement.”

Alongside his MPG Award for Outstanding Contribution to UK Music, Visconti is nominated in two other MPG 2017 Awards categories – International Producer of the Year and UK Album of the Year for Blackstar. He is also nominated for a 2017 Grammy Award in the category of Best Engineered Album, Non-Classical for Blackstar, which he co-produced with David Bowie and co-mixed with David Bowie and Tom Elmhirst.

Visconti was also a judge and voiceover commentator on the Sky Arts TV show, Guitar Star and had a key role in the New York City episode of HBO’s Sonic Highways, an American documentary mini-series directed by Dave Grohl and written by Mark Monroe. In that episode, he wrote and conducted a string arrangement for the Foo Fighter’s song The River.

Other notable projects include serving as the Music Keynote Speaker at both SXSW and CMW; acting as a Music Judge at the Reeperbahn Festival; performing on bass and vocals with his band, Holy Holy, writing a hugely successful autobiography entitled Bowie, Bolan and the Brooklyn Boy, and receiving an honorary Doctor of Arts from Kingston University in London. Furthermore, Kingston University recently named their new music studio The Visconti Studio.

As sponsors of the MPG Outstanding Contribution to UK Music Award, industry organisation PPL says it is delighted that Tony Visconti has been chosen as the 2017 recipient.

Peter Leathem, CEO, PPL, says: “We are delighted to be able to recognise the Outstanding Contribution made by Tony Visconti to the UK music industry. He is an incredibly talented producer who has played a crucial role in countless iconic recordings by, most obviously, David Bowie but also a huge spectrum of artists ranging from Morrissey and the Manic Street Preachers to Elaine Paige and Procul Harum. Tony is a true visionary in the world of recorded music. Many congratulations, Tony.”

Tony Visconti will be presented with his award at the MPG’s 2017 Awards Ceremony, which takes place on February 16th, 2017, at the prestigious Grosvenor House, Park Lane, London.

Now firmly established as a must-attend industry event, the MPG Awards attract music industry stars and VIPs who turn out in force to celebrate the enormous contribution that recording professionals make to the success of the UK’s music industry.

Tickets for the MPG Awards 2016 are now available to order. For full details please visit www.mpg.org.uk/mpg-awards/tickets.

The MPG represents and promotes the interests of all those involved in the production of recorded music, including producers, engineers, mixers, re-mixers, programmers and mastering engineers. www.mpg.org.uk