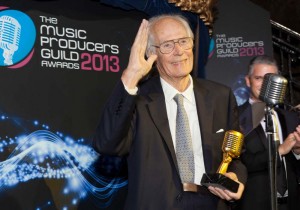 The executive board of the Music Producers Guild would like to express its sincere regret and sadness at the death of Sir George Martin, CBE, which was announced recently.

In 2013, the Music Producers Guild presented Sir George with its top accolade – an Outstanding Contribution to UK Music Award. Many record producers around the world owe Sir George a huge debt of gratitude, not just for his inspired production techniques, but also for his efforts to ensure that all producers rightfully receive a royalty for their work.

MPG Full member Tony Platt says: “Sir George set the tone for record production, and in particular British record production, by putting the artist at the centre of the music making process rather than treating them as a product. He did what he did really well and that made a massive difference to the way in which professional music production developed over subsequent years. He was also a charming and funny man who will be sadly missed.”

Best known for the integral part he played in the success of The Beatles, Sir George had a career spanning more than six decades, with 30 Number One hits and over one billion records sold.

He began his career in the music industry in 1950 when he joined EMI. After five years he became Head of Parlophone and was entirely responsible for the label’s output. During this time, he worked with esteemed classical musicians of the day and turned his hand to the pioneering comedy recordings of Flanders and Swann, Spike Milligan, Peter Sellers and Beyond the Fringe.

In 1962, Sir George met and signed The Beatles, a partnership that revolutionised studio recording and the creative process, incorporating new technology to take their music to new and increasingly diverse levels. Following their split, Sir George continued to push the creative boundaries with acts such as Jeff Beck, Jimmy Webb, America and the Mahavishnu Orchestra.

Sir George has also scored a number of feature films, including the ground-breaking A Hard Day’s Night and Yellow Submarine, as well as working on the title tracks to the Bond films From Russia with Love and Goldfinger and the title and score for Live and Let Die.

During his career, Sir George was awarded two Ivor Novellos and six Grammy awards, as well as an MPG Outstanding Contribution Award, sponsored by PPL.