#SelfieLeave update – MPG and UK Music step up the pressure 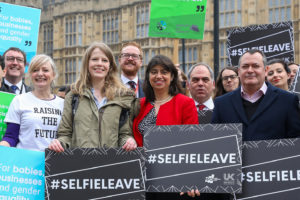 Music Producers Guild Executive Director Olga FitzRoy and UK Music chief Michael Dugher have called on the Government to include self-employed workers in the music industry in paid parental leave reforms.
They have written a joint letter to Business Secretary Greg Clark to urge him to do more to help workers in the creative industries who contribute £100 billion to the UK economy.
The move follows reports that the Government is considering extending paid paternity leave to 12 weeks.

In their letter to Mr Clark, Michael and MPG Executive Director Olga said:
“The vast majority of creators in the music industry are self-employed. At present, current regulations place the burden of childcare on the mother, damaging her career prospects while preventing fathers from spending time with their new families.

“With women still under-represented in all sectors of the music industry, the ability to share parental leave could be a game-changer in retaining freelance female talent.
“These urgently needed changes are long overdue. If the Government is serious about supporting businesses and the creative industries which contribute £100 billion to the UK economy, it must introduce reforms that reflect the modern working world.”