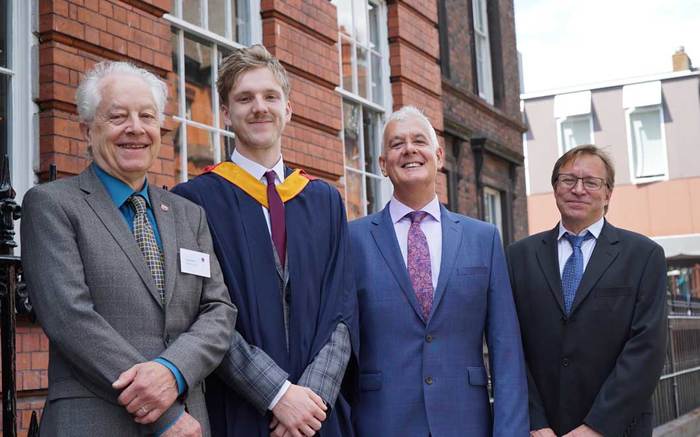 LIPA graduate Sam Baker has been named as the recipient of the 2018 Music Producers Guild Prize, which brings with it a host of benefits including financial support from PPL.

Now in its eighth year, the Music Producers Guild Prize rewards the most promising student to graduate from The Liverpool Institute for Performing Arts (LIPA) Sound Technology degree programme.

Jon Thornton, who heads LIPA’s BA (Hons) Sound Technology programme, says: “Sam’s technical skills and ability are what we’d expect from any student leaving the programme. But what made him stand out in his final year was his ability to marry these skills so proficiently to the ‘human’ side of being a producer. He has a natural flair for, and understanding of, what makes both music and people work well. The opportunities that the MPG LIPA Prize will afford him can take this talent and develop into something really special.”

Originally from Cardiff, Sam Baker joined LIPA straight from school having identified the course as one of the most prestigious in the UK.

“I played in bands from an early age and soon developed an interest in sound engineering and recording,” he explains. “The LIPA course was exactly what I wanted to do, and I was really thrilled when I was accepted onto it.”

During his time at LIPA, Baker produced local bands and undertook work experience at Trevor Horn’s Sarm Studios in London. This eventually led to the offer of a permanent job as Assistant Engineer, which Baker took up after completing his course. He is now finding his feet in London and thoroughly enjoying his new role.

“We are delighted, once again, to join with MPG Award winners and many of our Awards sponsors to support an exceptional graduate from the LIPA Sound Technology course,” says Tony Platt. “Our reward is seeing them flourish as they chart their career path and contribute to the amazing pool of talent making music in the UK and beyond.”

The many benefits conferred on Baker by the MPG Prize include the opportunity to work alongside top recording professionals such as producer Steve Levine, Producer Jolyon Thomas, mix engineer Spike Stent, recording engineers Marta Salogni and Manon Grandjean, orchestral recording engineer Haydn Bendall and mastering engineer Matt Colton. He will also have the chance to intern at Abbey Road Studios, winner of the 2018 MPG Award for Best Studio, and will be mentored by various MPG members and by Jane Third, winner of the MPG A&R Award 2018.

To enable him to take up these opportunities, Baker will receive up to £500 from PPL to cover travel and accommodation costs. He will also visit the headquarters of AMS Neve and Avid to meet their product specialists, learn about console deign and have in-depth tuition on Avid’s flagship controller, the Pro Tools S6. In addition, AMS Neve is adding to Baker’s equipment collection by donating a 1073N Mic Preamp and EQ.

“I am really delighted to have won this prize and I can’t wait to take up these wonderful opportunities,” Sam Baker says. “I’m also looking forward to becoming a member of MPG and getting tickets to next year’s MPG Awards. I’m good friends with Loïc Gaillard who won the Prize last year and he’s already told me how much fun I’m going to have. Combined with a new job and a move to London, it is going to be such an exciting year!”