For those of you who weren’t able to attend, we publish here the full text of the speech given by Olga FitzRoy at the MPG Awards event, held at The Grosvenor House Hotel on February 28th, 2019.

.She says it alll… 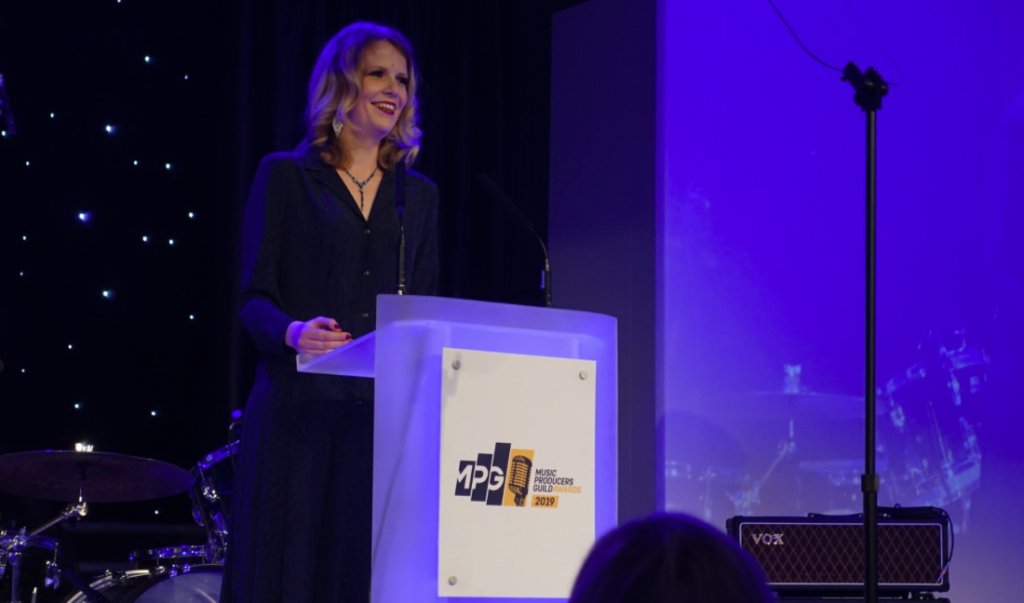 I was asked to speak about what the MPG means to me, and realised that this has changed a lot over the years.

At first I thought it was a social club for middle-aged white men to discuss how everything was better before protools.

I soon learned that there was also an awards ceremony, for those same middle-aged white men, I assumed.

(This is not an attack on middle-aged white men, I love you all dearly, and have learned pretty much everything I know from you)

But the MPG has changed. Recent awards ceremonies have included men and women of all ages, and the impression of studios being boys clubs is definitely shifting. But there is still work to be done on all aspects of our diversity.

The thing about the MPG that is most important to me is our potential to change our industry for the better:

We’ve all noticed things that we’d like to change, and mostly it doesn’t go further than a rant down the pub. Which is fine if you’re complaining about how assistants are always on their phones these days, or that the new 414s are rubbish compared to the old ones.

But there are also more serious issues facing our industry. From streaming income (or lack of!), to business rates, to the way that our government continues to ignore the needs of self-employed people who make up 94% of our membership. From unpaid internships, to studios closing, , to cuts in music education. And I think many of us have less human interaction in our work than we perhaps used to 10-15 years ago. As we sit in our lofts and sheds (sorry, ‘garden studios’) waiting for client comments via email, it’s easy to feel alone and isolated, and powerless to make any sort of change.

But for me the MPG shows that when we come together we can change things, whether that’s through industry co-operation or political engagement.

As board members at UK Music, we are able to work together with other industry bodies on issues that affect us all. Last year we worked on the Agent of Change bill, to protect venues and studios from developers. My own ‘baby’, the SelfieLeave Bill, to give shared parental leave to self-employed parents was read in parliament last year. We have also worked with industry colleagues to push for improvements in copyright law that will ensure our members get a fair share of streaming income. I know MPG directors and other volunteers are also working to get proper credits on streaming platforms, so we all get the recognition we deserve.

Without the MPG I know I wouldn’t know about half of these issues, and I certainly wouldn’t have a clue what to do about most of them, so I’d probably go back down the pub and moan about microphones. (Actually I still do that)

For anyone who’s ever tried to organise anything involving engineers and producers, they will know it’s like herding cats. So it’s pretty impressive to have a coherent, collective voice that speaks for all of us on the issues that affect our industry. And, of course, even more impressive that the awards team have managed to get so many of us together in one room at the same time, once again.

Thank you very much and have a brilliant evening!