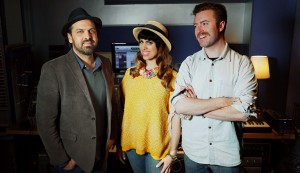 MPG Full Member, Producer and Songwriter Juan Luis Ayala teamed up with his wife Singer Songwriter and TV presenter AYALA and his Film maker brother-in-law Finnian Moore to start a brand new live music TV show broadcasting on the SKY network. They had noted the lack of opportunities to promote new and live music on TV so this family trio decided to do something about it.  Together the family team who are based in London’s legendary Music Studio ‘Battersea Park Studios’ (aka Sphere where the likes of Adele, Ed Sheeran and Queen have recorded), gathered their Artist and even celebrity and friends to begin The Ayala Show. The show is now in it’s second season and has included some incredible fresh new talent as well as new music from more established acts. Guests have included Grammy Award Winners, Mercury Prize & Mobo Award nominees, BBC Introducing acts, Billboard Songwriters of the year award winners, BMI award winners as well as some completely new yet unknown talent. Scouted and managed by musicians and creatives alone there is no corruption in the application process!

Season Two launches on 8th April broadcasting on IRISH TV (SKY191).  Artists include Bloom Twins (produced by and opening for Duran Duran on tour), Mercury Prize nominee ESKA, The Legendary Gilbert O’Sullivan who has a duet with Ayala on his new album, Sam Lee who  has an upcoming Royal Albert Hall gig, some BBC introducing artists including Signals and Ellie Rose and loads of other incredible talent! Not one to miss!

So it’s interesting that you 3 are family; Ayala has her brother and her husband on either side of her!  Have you guys always worked together?

Juan: No, not at all, it happened very naturally though.  Every Producer / Song-writer needs a good Artist and vice versa and every musical product needs images to go alongside it and Finnian is an excellent Film Maker and Photographer.

How did The Ayala Show come about?

Ayala: The idea kind of fell into our laps really.  Finnian and I were out in Ireland filming my last music video (This Year). It was a cheap location because our family cottage is there for us to stay in.  We literally just wondered in off the street to the Irish TV headquarters, which is up the road from our village (and I was dressed up for the filming which might have helped!)  We only went in to ask if they might play our music video, but we chanced upon one of the Directors of the channel, who of course turned out to be from our village!  Just from chatting with us, she straight away saw the potential for a music show with me as the presenter and we loved it!  Old school! We wanted to own to show though, so that’s why we set up our TV and Film Production company together to make it.

How do you find the talent for the show and who does that amongst you?

Ayala: People can just send us an email to contact@theayalashow.com with a biog and links to their music, but series two is already full and we wont be talent-scouting properly for series three until June.  We’ve also found a lot through relationship and talent we’ve met through our professional lives.  I was working as a professional singer and songwriter before I started the show so I have met a lot of musicians and talent along the way, and similarly Juan bumps into or works with loads of people at the studio.

Finnian: These two have been working in the music industry for years now, and they were already based at Battersea Park Studios before we started the show. For me as a film maker, music is pretty much always the starting point creatively. My fascination of the marriage of music and image runs deep. So we’ve all loved the process of finding the talent, but a lot of the contacts have come from Ayala and Juan.

Juan, what is your role in The Ayala Show and how have you found the process?  Are the acts all filmed and recorded in your own studio?

Juan: I oversee the audio.  At the beginning I had to record, mix and master and process all the audio myself and a lot of that was done in my studio, but the show was taking over my life for a while so we quickly grew the team and got some help in!  We use Studio One to film the bigger line-ups (where artists like Adele, Ed Sheeran and Queen have recorded).  My studio is smaller so we film Acts with smaller line ups in there -like this one for example: http://ayala.tv/JStilgoe

It’s a great sounding room. In fact my room was Duran Duran’s studio for a decade before I moved in (They are now in the bigger studio 2).  It has been so great to be involved in promoting a live music project like this, these days I’m mostly in the studio writing and producing and not naturally as involved in live music as I used to be, so I’ve loved the chance to be around the live scene again. And because I work alongside artists a lot, I am aware of the lack of promotional opportunities in the industry like this one.  It feels good to be involved in filling that gap.

Where can we watch the show?

Finnian: Friday nights at 10pm or Sundays at 5.30pm on IRISH TV (Sky 191). It can also be found on Freesat (channel 400) or streamed online at www.irishtv.ie