The production duo behind hits for artists such as Madness, Elvis Costello and Bush will receive this accolade at the 2018 MPG Awards ceremony in London next March.

One of the top accolades at the 2018 Music Producers Guild Awards – PPL Presents The MPG Award For Outstanding Contribution To UK Music – will be handed to producers Clive Langer and Alan Winstanley in recognition of one of the most influential partnerships in music production over the last 40 years.

Developing a sound described as “That English Pop Thing”, Langer and Winstanley have a credit list that reads like a pop hall of fame and includes many classic albums, not least Elvis Costello’s Punch The Clock, Dexys Midnight Runners’ Too-Rye-Ay and Bush’s best-selling album Sixteen Stone.

It was while at art college in Liverpool during the 1970s that Clive Langer formed the cult rock band Deaf School – a band that released three albums and was described by Mojo founder Paul Du Noyer as one of the “only two bands that mattered” in the history of Liverpool’s famous musical heritage. 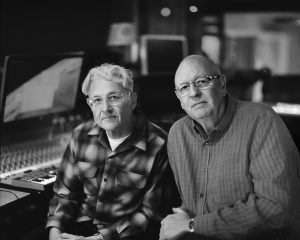 Langer met Alan Winstanley while recording a demo session at TW studios in London where Winstanley was working sessions as an engineer. Fascinated by the sound of Phil Spector, Winstanley spent the late 1970’s learning his craft and was employed on numerous sessions for acts such as The Buzzcocks, Generation X, Joe Jackson and various Stiff Records artists including Wreckless Eric, Lena Lovich and Rachel Sweet. His switch from engineering to production came in the late 1970s when he produced The Stranglers fourth album, The Raven.

Langer and Winstanley’s first venture into co-production was for Madness and resulted in the band’s 1979 debut album One Step Beyond, which was recorded and mixed in less than four weeks and spent over a year in the UK album charts. This inaugurated a partnership that has resulted in numerous hit records for artists such as David Bowie (for whom the pair produced the Live Aid single Dancing In the Street), Morrissey, The Teardrop Explodes, Catatonia, They Might Be Giants and Hot House Flowers.

By honouring Langer and Winstanley with an Outstanding Contribution Award, the Music Producers Guild is recognising an exceptional body of work that has made a significant contribution to the success of the music recording industry.

“These are two guys who exemplify the role of music producer,” says Tony Platt, MPG Awards Group Managing Director. “Their collaborations across so many genres have been an outstanding example to all those upcoming music makers that we have seen building their careers over recent years.”

As sponsors of the MPG Award For Outstanding Contribution To UK Music, industry organisation PPL says it is delighted that Clive Langer and Alan Winstanley have been chosen as the 2018 recipients.

Peter Leathem, Chief Executive at PPL, says: “A huge congratulations to Clive and Alan, one of the most successful and acclaimed production duos of the past four decades, on receiving the Outstanding Contribution Award at the 2018 MPG Awards.  A quick look at their production back catalogue and you realise how many seminal hits they’ve been involved in the making of; Our House and One Step Beyond by Madness, Come On Eileen by Dexys Midnight Runners and Reward by The Teardrop Explodes, to name just a few.  They are both thoroughly deserving recipients and have well and truly made their mark on popular music in recent years.”

Langer and Winstanley will be presented with their award at the MPG’s 2018 Awards Ceremony, which takes place on March 1st, 2018, at the prestigious Grosvenor House, Park Lane, London.

Now firmly established as a must-attend industry event, the MPG Awards attract music industry stars and VIPs who turn out in force to celebrate the enormous contribution that recording professionals make to the success of the UK’s music industry.

You can listen to the audio recording of an interview with Clive and Alan, conducted at RAK Studios by Sue Sillitoe.

Tickets for the MPG Awards 2018 are now available to order. For full details please visit www.mpg.org.uk/mpg-awards/tickets.