A message from the LIPA prize graduate

This just in from James Mellor who won the 2014 MPG prize for the best graduate of the year from The Liverpool Institue of Performing Arts (LIPA). The prize provides a number of days shadowing prominent and experienced Full Members of the MPG in their daily work routines along with a free ticket to the annual MPG Awards event. 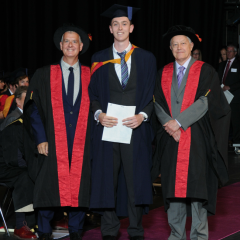 “Nearly 12 months has passed since graduating from LIPA and having the pleasure of being presented with the MPG award, and what a year it’s been.

The help and guidance I’ve received from MPG and their associated members has been fantastic and has taught me a great deal about the inner workings of the music industry, knowledge that I feel will be invaluable in moving forward with my career.

I’ve also had the pleasure of working along side some fantastic people in some equally fantastic places.

Highlights included a day with John Dent taking the time to show me his mastering studio in Taunton, talking me through his techniques, gear and even demonstrating how he cuts records to vinyl. A session at AIR studios shadowing classical engineer Haydn Bendall on a recording of the London Philarmonia Orchestra, an incredible experience that opened my eyes to scale of of running a major London studio session, recording ensembles of 70 plus musicians! And with a week booked in July at Flood and Alan Moulder’s ‘Assault and Battery’ and a further session with Dan Cox at ‘Urchin Studio’s there’s plenty more to look forward to this summer.

I feel very lucky to have been involved in such incredible opportunities and want to thank MPG for making it all possible.“

“It’s been a wonderful experience so far. A definite highlight has been meeting Mark Crabtree (who was the subject of some of my dissertation research) and being shown around the impressive Neve factory floor. I had an eye-opening time at Abbey Road, where I got to witness an orchestral session for the first time. I was pleasantly surprised by the jovial nature in which Haydn Bendall and his fellow engineers conducted the session. It filled me with confidence that the pure and simple joy experienced when working with music can be found in any production, regardless of its size and significance. Most recently, I had the chance to assist Steve Levine at his personal studio. Steve was very welcoming and informative as he showed me a lot about how he approaches sound, and the wide array of awesome gear he uses to achieve this. I hope to be returning there soon as a fellow resident of Liverpool.”